All of the bosses, except for Death, Alien Cruiser and Dice, can be found in the Colosseum (beneath Eastern Island), along with a few mini-bosses. The being inside will offer insight into how to defeat them.

This is an optional boss for the Dragon questline. If you summon the Alchemist before you defeat the dragon it will give you a quest to hatch 5 baby dragons. It will then become your friend and will fly you to magic island. The Adult Dragon can be "respawned" by raising Dragons. Will not attack player unless attacked first. The Dragon will fly around and chase the player. It will return to its nest if the player flees. The Dragon has the fire element and takes more damage from water and earth element weapons.

After the initial boss fight, it can be respawned with an Earth Gem at the Golem Factory.

Lanterns or any item that illuminates areas are recommended. The Wyrm Queen is nigh invulnerable (Fire is semi-effective). She does not attack directly. She spawns Wyrms when Wyrms are killed, which can attack the player. However, the Wyrms will not attack you if you equip a Shadow Cape or other invisibility item. The only weakness is when the Queen opens her mouth to spawn Wyrms. The Queen will respawn when the player either leaves the arena or stays in the arena long enough. She will not respawn in the original den, however.

One strategy to help beat the Mirrows is to use a lot of healing items and Landmines. Bringing a familiar will help too. A ranged weapon will help you with the tentacle Mirrow, making the fight much easier, as she does a lot of damage, but only at close range. The other Mirrow can be defeated with a Chainsaw (Enchanted one is better) and a lot of healing, as he has both ranged and close up attacks. If you'd like to brute force the fight, around 20 cheeseburgers and a fire sword spam will do the trick.

The Old One Edit

You can have The Alchemist fight this boss for you; however, if you have The Alchemist fight for you, he will die. A shield would also make this fight a lot easier, since shielding (holding space) will block all damages from the orbs (including the charge attack). Guns and bows are effective or fire element swords. It has 2 stages, orb only and laser. Stay behind the alchemist, and move towards the Old One when the final orb is released if using melee. You can't run from them, they can phase through rock. The laser stage engages when it reaches half health. It will spawn more orbs per cycle, and shoot a laser directly at the alchemist, filling the room before charging to the other side. Hide in the opening of the cave to not get hit.

You can find both Pirate Ships guarding their base on the east side of Divider Island. You must defeat them both to access the structures on this side. Defeating them also completes the quest Defeat Pirates, which lets you stay at the Inn for free. The downside is that debris will no longer spawn in the ocean between Sunset Haven and the Starting Island. One effective strategy to beat them is using a Patrol Boat coupled with a Patrol Boat Launcher. Using enchanted Missiles makes this strategy even easier. A Patrol Boat Gun with about 70-80 normal Bullets also works. One late game strategy is to fight them with a Dragonship, or an Escort Fighter.

You need to destroy the tentacles to access the head, shooting at the head will decrease its HP. Ice Torpedoes are extra effective against the Kraken. Using the Book of Vines coupled with two-three Ice Creams is an efficient late game strategy. A strategy for even later in the game is to use the Mobile Lab's ram damage to constantly hit the Kraken while shielding, which ensures an easy victory, no resources spent, and is also hilarious. You can xp farm by destroying the tentacles, but not the head, and letting them regrow.

Weak against Fire and Ice. Optimum attack pathway is through the air where the Cultivator is limited to its Spores attack. The Cultivator is possibly the easiest boss in the game.

Melee weapons, such as Dragon Sword or other Fire enchanted strong weapons, are effective against the Storm. Attack the Storm by climbing up the walls, where its storm cloud attacks cannot reach you. When its tornado attack comes, just dig underground. Shields will not provide protection from the icicles. An Elder Dragon that is modified with a Horn can also deal damage to the Storm. Alternatively, you can have the Elder Dragon kill it for you once you have made an Evolution Gem for a Revitalizing Potion (from the first Sea Witch quest).

Use a Dragon Ship, With about 200 steak, 12 blood gems and you should be good to go. Heavy Fire weapon is recommended, because it can pierce through the minion ships. If you decide to use the Fighter Escort, then you could try to use antimatter missiles as they are the only weapon that can pierce their shields. If it drops a bomb, it will hit the planet and destroy structures and crops. You can fly your spaceship underneath it to take the bomb damage, though. If you are close enough to the bomber, the explosion will also damage it. The bombers above the Alien HQ will not bomb because then they would hit their own planet. You can have The Mirrows kill the one above the starting planet during the first wave for you, but they will die. The best way to kill the bomber is to board it, because then, after killing the crew, you can loot the cargo. Also, this will allow you to take it over. You can do the same for the fighters around it, allowing you to get a lot more loot.

The best way to defeat this ship is to board it, same as with the bomber. You can take it over with the Book of Translation, and loot its cargo. It is almost impossible to kill without boarding, because of its 5k health and almost impenetrable shield. Even after killing the crew, it is tedious to destroy.

First, take care of the Alien Cocoons and Hatchlings. They will just bother you while you attack the crab. Afterwards, start by destroying the tentacles. Stay above the area that it shoots spikes to, and you should be safe to stay still and attack, as the boss doesn't move. Another way of beating it is by hiding behind some of the bedrock and attacking with a spirit bow, as the spirit bow can pass tiles.

Ignore everything except the main section. Go above the area the beam attack hits, and attack it Use the Book of Shielding, or the Energy Shield and a lot of batteries, to block the launcher's attacks, or use a Book of Flood in the center to destory them all. Don't use the Stealth Helmet, as none of the boss' attacks are fooled by invisibility. Bring a lot of Dragonblood to recover both health and stamina from using the spellbook. 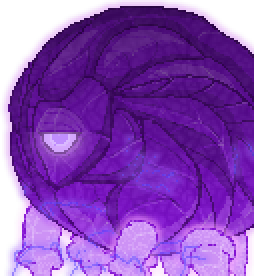 Once every 150 damage it takes, the boss changes element and attack: fire, then water, then ice, then earth, then plant. Each attack is the effect of a tier 3 spellbook.

The boss also has an upgrade of the homing launchers, that deal more damage than any other attack. It homes into you, so it's highly recommended you block. For which shield to use, the energy shield is the best for that amount of attack. It is also recommended that a lot of cake or ice cream be stockpiled due to its 300/450 stamina recovery and dragon blood being insufficient on both health and stamina recovery unless the latter is cast manually.

After losing half of its health, the boss will summon 3 enemies of its current element. First Cockatrices, then Snaptopuses, then Icers, then Purple Golems, then Crawlers. The enemies summoned are stronger than usual. Don't use the Stealth Helmet, as none of the boss' attacks are fooled by invisibility, except the enemies the boss summons. The enemies that it summons will drop normal loot, and can even be captured, but will turn into normal versions of themselves when captured.

Another option is to employ the Exo Mech and bring a bunch of exotic matter and chromium for shields, repairs, and ammo. It helps to have the Exo Fighter pilot familiar too.

The Megolemech is by far the toughest mini-boss in the game, as while it is not the strongest, it cannot be fought with a spaceship. To reduce the massive amount of damage that it deals, you can equip water spirit robes or something that resists all elements, such as carapace armor. You will also want a Book of Flood, bound to a magic staff, and a Book of Shielding, plus a lot of stamina restoring food. It is much harder to fight on the science path, but you can, using an Exo Mech with a lot of Chromium and Exotic Matter. The Exo Mech Gun and the Exo Mech Shield are best for this purpose.

You fight the chimera as the final boss of Unnature Sanctuary. Defeating it puts Splicer under your control, and allows you to turn human again. A good strategy is to try to not get close, at it does massive close range damage, and block the ranged shots - werewolf claws can be used to block. There is a timer for it, after which it is turned into a rat and automatically defeated.

Dice is the other boss on Unnature Sanctuary. He first appears as the backer NPC Dice, but after talking to him, he transforms into a giant werewolf and attacks. He has a short range attack that deals damage all around him and very powerful melee attacks, so a ranged weapon is the best way to fight him. Defeating him unlocks two more options for modification by Splicer.

The Dishonored One Edit

High defensive power and ranged weapons are the best tools against the Dishonored One. If using science to beat him, have a Mobile Lab on standby to resupply power and frequently recover health and stamina. With magic, use a wand and book of shielding to block the orbs. After half his health is gone, he will launch double the orbs like the Old One. He launches 2 volleys of orbs in either phase and teleports right next to you afterwards, then unleashes the flood spell, during which his shield drops, then he sets up more orbs after the flood is gone. Every hit he takes will cause him to raise his shield again.

Because of the small platform you fight Death in, there's not much space to dodge its attacks. Because of this, you will need a Book of Shielding or Interstellar Broom to block the attacks instead. A good strategy is to use a combo of the Spirit Fish familliar and Spirit Bow, running away from Death and shooting him, while the Spirit Fish attacks him up close. This not only deals damage faster, but also slows Death down, making it so you'll be hit less. When Death approaches, equip a Book of Shielding or Interstellar Broom, run past it while blocking to the other side of the platform and start shooting again. If you want to try and capture death, remember to order your Spirit Fish to stop attacking, as it may accidentally kill Death. You may also use a spirit fox helm since it deals much less damage and is more reliable when controlling an optimal capture health.

Unlike most other bosses, Death can be fought again outside of the Colosseum. After leaving Death's Door the dungeon resets, meaning Death respawns as well.

Retrieved from "https://aground.fandom.com/wiki/Bosses?oldid=9033"
Community content is available under CC-BY-SA unless otherwise noted.